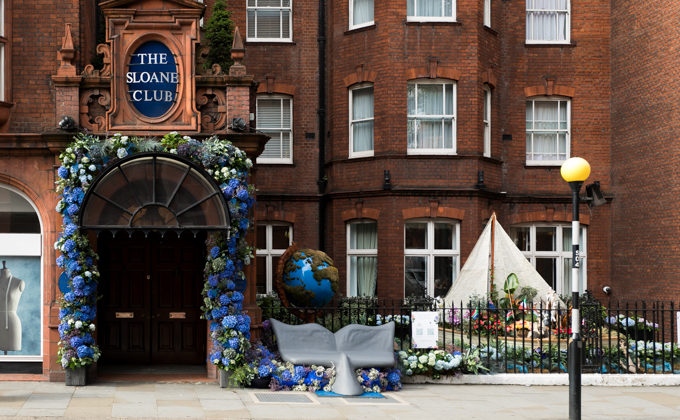 The Sloane Club celebrates two wins at Chelsea in Bloom

Chelsea in Bloom is a prestigious annual floral art show that takes place alongside the renowned Chelsea Flower Show each year. This year, it transformed the streets of Chelsea from 20th to 25th September with breath-taking floral displays.

Produced by Cadogan in association with the Royal Horticultural Society (RHS), the annual competition has grown dramatically each year, with Chelsea’s best retailers, restaurants and hotels adorning themselves with creative designs to compete for the coveted awards and of course, The Sloane Club had to take part!

This year's theme is Extraordinary Voyages inspired by ‘Around the world in 80 days’ and evoking the spirit of optimism, adventure and the golden age of travel.

The display at the Sloane Club is a celebration of Hannah Snell, a secret female sailor in the Royal Marines.

Around 1746, at the age of 23, Hannah ‘borrowed’ her brother-in-law’s name and clothes, enlisted and set sail to find her missing husband – a Dutch sailor. Disguised as ‘James Gray’, she rose through the ranks from Cook to Assistant Steward to Ordinary Seaman and found in battles as far away as Pondicherry.

After finding out her husband had been executed in Genoa, Seaman Snell finished her tour of duty. She revealed her true identity and petitioned the Duke of Cumberland for a pension from the Royal Chelsea Hospital. He agreed. Her story became a literary and theatrical sensation for quite a few years, and in 1792 she was laid to rest in the gardens of the Chelsea Hospital.

Docked at the front of the Sloane Club following a journey around the world is the Snell sloop. A homage to travel for love and adventure, the boat features mementoes from far-flung affairs and affiliated clubs visited during its travels.

The displays were judged by an expert panel and the coveted ‘People’s Champion’ award was voted for by the general public. We were delighted to be awarded Gold and People’s Champion runner up for our installation.